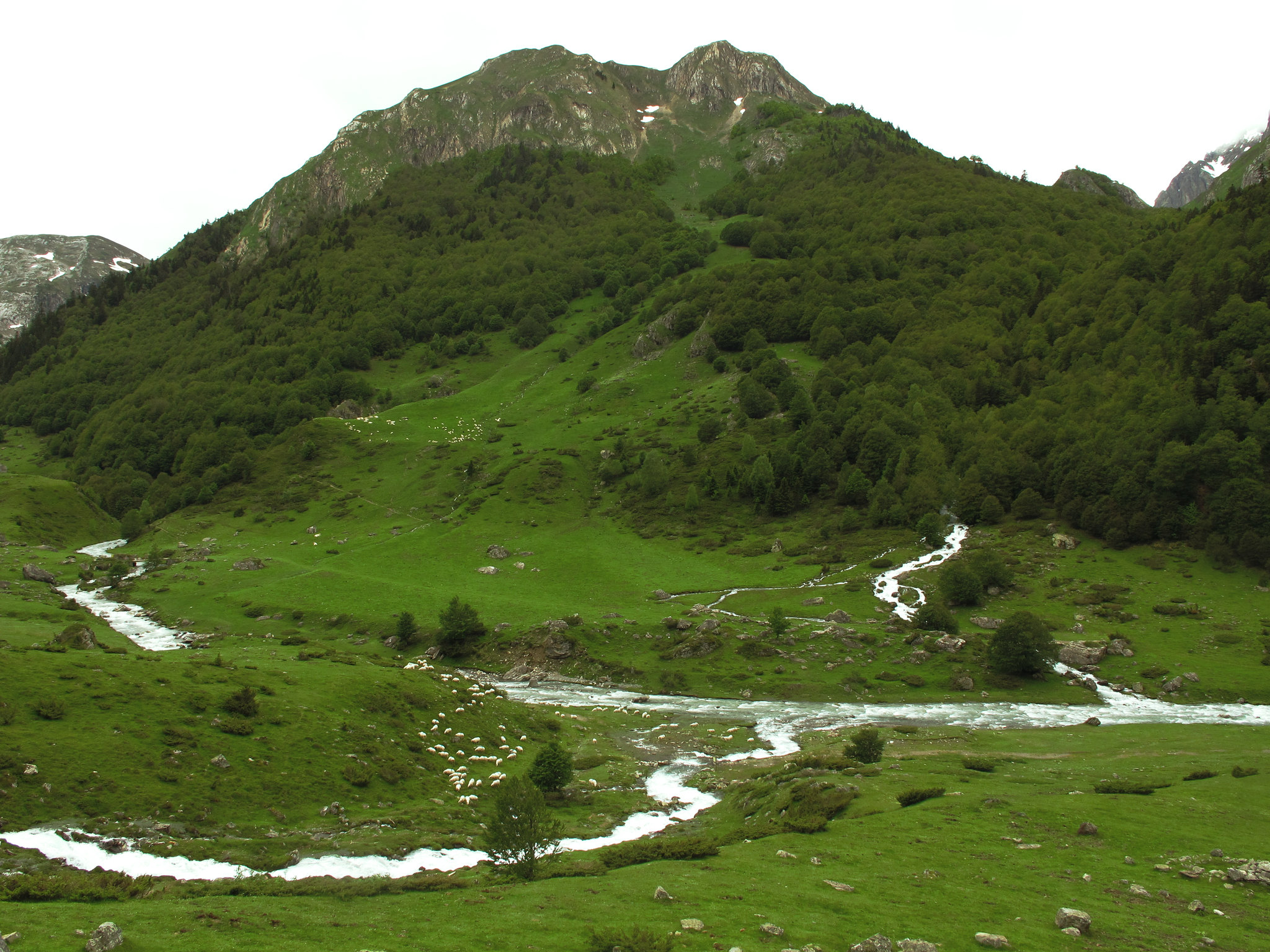 Next to Navarra and Aragon, the French region of Aquitaine is of special interest for those who love hiking.

How not to be? This area treasures a multitude of landscapes worth seeing, among them the French Atlantic Pyrenees, not as tall as the central Pyrenees, but equally beautiful.

However, each of its departments (Gironde, Dordogne, Olt and Garonne, Landes and the Atlantic Pyrenees) has special charms. Therefore, from Walkaholic we have selected some of the most beautiful routes you can walk in Aquitaine.

Head of the Aspe Valley through the Sansanet forest

This easy circular route takes us through the Aspe Valley in the Atlantic Pyrenees of Aquitaine. With a slope of 150 m and a distance of only 3 km, it can be completed in about an hour.

The Sansanet recreation area, next to the Somport pass in the Aspe valley, will be our starting and returning point. We will walk along the banks of the Aspe River and a beautiful beech and fir forest. At its highest point, we can enjoy the amazing Aspe Pass, which separates with steep rock walls Spain from France.

This is the westernmost valley of the Pyrenees National Park in France, and during the walk we may be lucky to run into some members of the local fauna. What is certain is that we can admire the Pyrenean flora in full along the way.

Located in the French Basque Country in Aquitaine, one of the most admired places in Europe is the Kakueta Gorges.

This route has a cumulative slope of 100 m and is considered of low difficulty. It’s 4.1 kilometers long, so can be traveled with ease in 2 hours. Due to its characteristics, this is a walk that can be enjoyed as a family.

The trail begins and ends at the “Le cascade” Bar, following a path that runs along the bottom of the gorge through several walkways and bridges, surrounded by abundant flora. Through it you reach the beautiful waterfall of Kakueta, of 20m high. Another site of interest is the Grotte du Lac, a cave at the end of the tour full of stalactites and stalagmites.

The gorge has been excavated by water for many years, creating a 2-kilometer canyon with 300 meters high walls. In one of its sections called “Le Grand Etroit”, the walls get only 3 meters away.

For those who like mountaineering and challenges, this high mountain route with climbs will be ideal. Planned in two stages, it takes the parking lot of Anéou as starting and ending point.

During the first stage, we will proceed along the normal route of Soum de Pombie and the Souzon pass, ascending about 420 meters in just 2 hours. It is advisable to stop at this point, and spend the night in the Pombie shelter or make bivouac in the 1st chimney, since the second stage will be much more demanding.

of Soum de Pombie and the Souzon pass, ascending about 420 meters in just 2 hours. It is advisable to stop at this point, and spend the night in the Pombie shelter or make bivouac in the 1st chimney, since the second stage will be much more demanding.

On the second day, three chimneys need to be overcome to arrive to the Portillon cross, in approximately 1.30 hours and the ascent to the peak of the Midi d’Ossau in another hour. Then it takes 4 hours to descend back to the Anéou car park, for a total travel time of 6 and a half hours.

In total, the entire route covers about 15 km, but conquering this black mountain is a challenge. The best seasons are summer and fall, since the snow greatly raises the technical difficulty to conquer this mountain.

It is recommended to bring mountain equipment: helmet, harnesses, rope and descending equipment should be in our backpack along this route

This is a simple route of only 4.2 kilometers and an accumulated slope of 225 meters, but it has the great reward of walking on a suspension bridge 150m over the bottom of the canyon.

Taking the Mouline bridge near the Logibar lodge as a starting and ending point, it takes about 2 hours to reach the Holzarté gorges and the suspension bridge, which will really take your breath away. It was built in 1920 and renovated in 2010, being one of the great attractions of the Soule Valley.

Then, you return down to the Mouline bridge. The road to the catwalk is well signposted and has a lot of traffic in summer. However, care should be taken if it has rained, as it can be slippery in some places and there are precipices near the path.

If this route is not enough for you, take the Ardakotxea circuit (4: 30h and 600m slope) or the Amubi circuit (4: 30h, 400m slope) to fill the day. Both share the Holzarté walkway as a site of interest.

This beautiful but demanding route can be traveled in about 10 hours, so it is convenient to start early. It is 20.23 kilometers in length, with a strong slope of 1,420 meters. The path, although well signposted, is classified as difficult.

Through this route we will ascend, from Rincón de Belagua, to the top of Mount Ukerdi in the middle of Larra. On our way we can explore the Antxomarro Cave, where we can collect water from a spring which flows there.

Then we march through the Ukerdi Valley, which stands out for the combination of meadows, forests, pine forests and karst areas; climbing to a height of about 1800 meters over the sea level we find the Portillo de Larra, from where you reach the top of the mountain.

The return is made by the GR11, a much more comfortable trial, since it goes through meadows instead of stony ground.

Of course, these are just some of the routes you can choose to get to know Aquitaine. There are many more: if your favorite is not on our list, leave us a comment so entire Walkaholic family gets enriched by your experience.

Who knows? Maybe one of these days we meet on the road, walking the best hiking trails in Aquitaine.