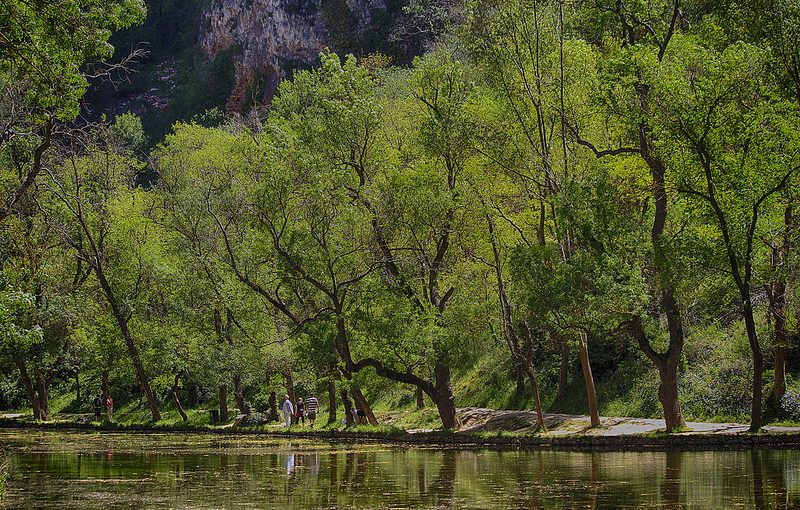 In a previous article, from Walkaholic we talked about the 15 National Parks of Spain , where we can go hiking. However, the natural beauty of our country is vast, and there are many other places where hikers can go to enjoy themselves. Whether it’s countryside or mountain, beach or coastal, here we bring you 15 natural parks of Spain that will leave you breathless.

Therefore, today we propose to take you on a “virtual” tour of the natural parks of Spain, to throw some ideas to plan your next adventure.

The differentiation is in who is responsible for their care, maintenance and exploitation. While national parks are considered to be those in which the Spanish state is directly in charge, the natural parks are under the direct responsibility of the government of the autonomous territories.

Now, we start with the list of these wonderful natural parks ?

Through the municipalities of Almería, Níjar and Carboneras, the Cabo de Gata-Níjar Natural Park stands out for the majesty of its volcanic landscapes.

However, it is also full of a flora and fauna that includes species from the marine, coastal and terrestrial environment. It is the largest protected area of ​​the Mediterranean coast, with its 63 kilometers of coastline full of cliffs and reefs.

The natural variety of this park not only makes it perfect for scuba diving, surfing, bird watching, boat tours, horseback riding or canoeing, but also promotes climbing and hiking. 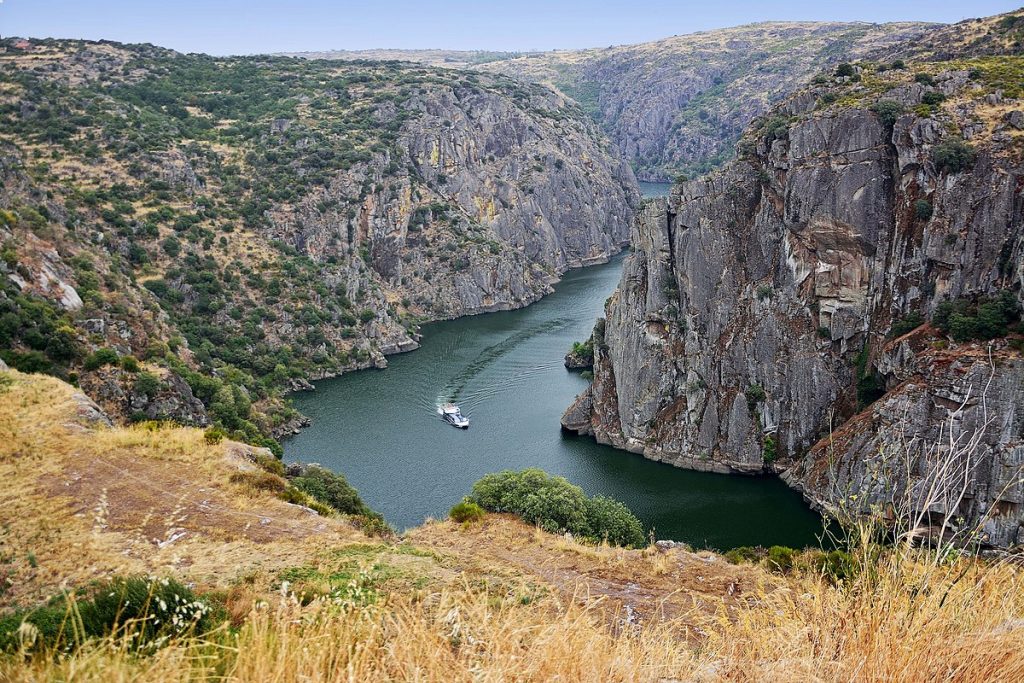 One of its main attractions is, of course, the Douro River, which forms a large 120 kilometers long and 400 meters high canyon, separating Spain from Portugal. This can be traveled by boat or car, but of course we prefer to do it on foot.

This way you can better enjoy its many sites of interest, such as the Mirador del Picón de Felipe, the Mirador de Picote and the Pozo de los Humos, among others.

There are many small and long distance routes with all kinds of difficulty, being one of the best the Horse Tail in Masueco, with 9 kilometers and wonders as the mouth of the Uces River in the Douro.

In the central-eastern sector of the Cantabrian Mountains, south of Asturias, it’s almost 38,000 hectares give to the Redes Natural Park a varied geography, with geological contrasts ranging from glacial formations to pasture areas. 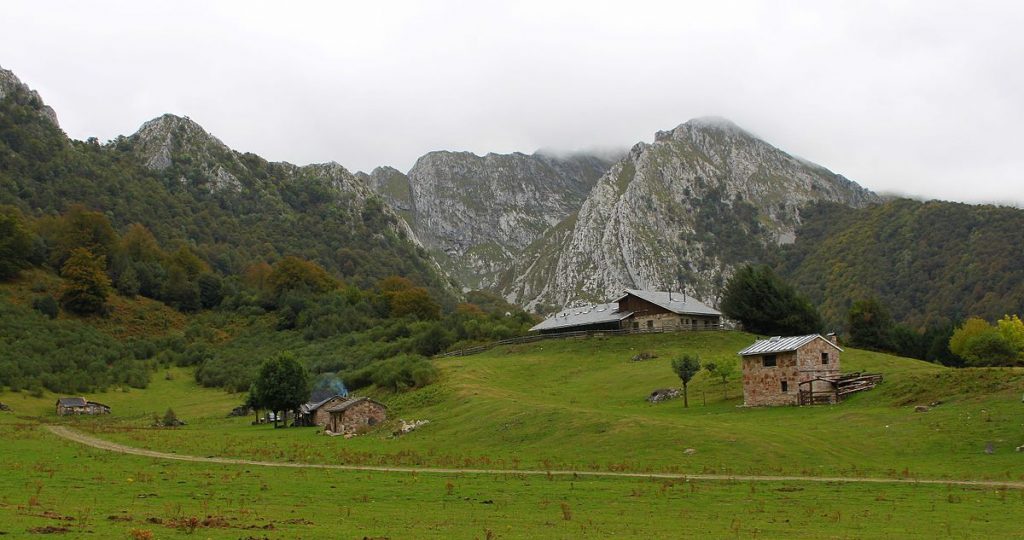 Declared as a Natural Park in 1996 to protect its flora, there are many beech woods. In the park live chamois, wolves and brown bears.

It is also worth going to Campo de Caso, which has a Nature Interpretation Center.

It is located in the province of Cádiz, with part of its territory in Malaga, going from the mountains to the El Estrecho Natural Park. 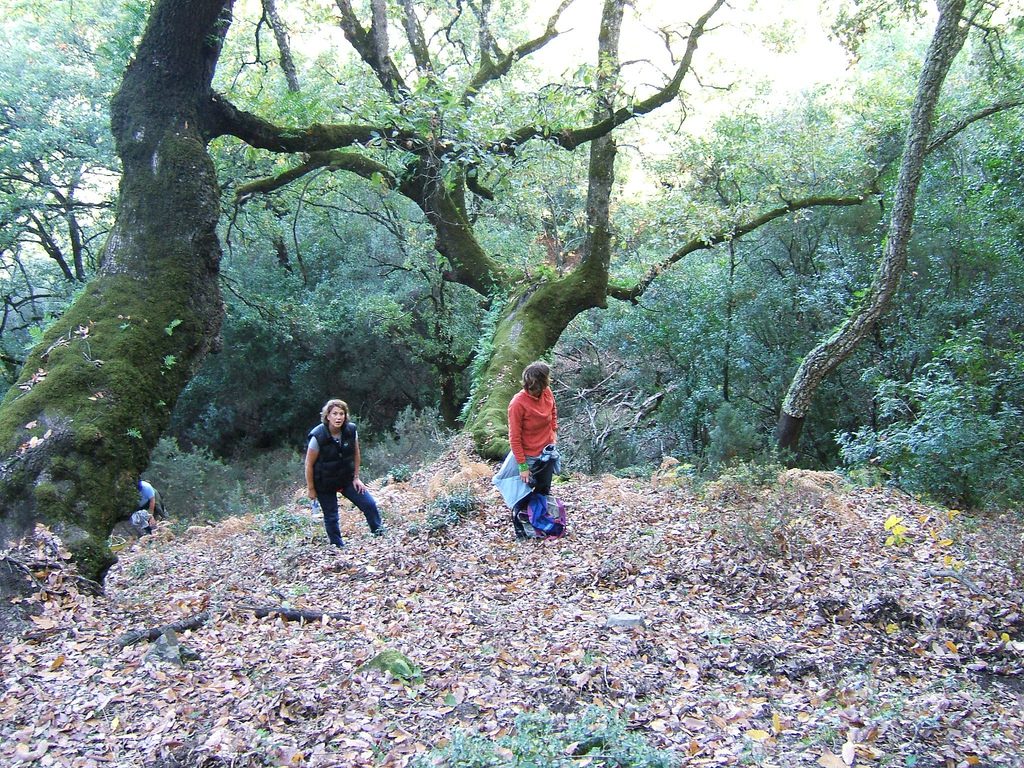 Los Alcornocales Natural Park stands out for its enormous diversity of its geography and landscapes. Water is always the protagonist, so you can’t rule out activities such as canoeing, although of course our park’s favorite is hiking. If you want and know which are edible, there is a lot of fun in mushroom picking.

In southwest Asturias, an hour and a half by car from the capital there is a beautiful area declared a Natural Park in 1988 and a Biosphere Reserve in 2000.

It consists of four main valleys where the four most important rivers of the territory run: the Somiedo, the Valle, the Pigüeña and the Saliencia. This privileged place in the north of the country is full of high peaks, lush forests and crystal clear lakes. It is home of animals such as bears, wolves, deer and grouse, in its 238 square kilometers surface. 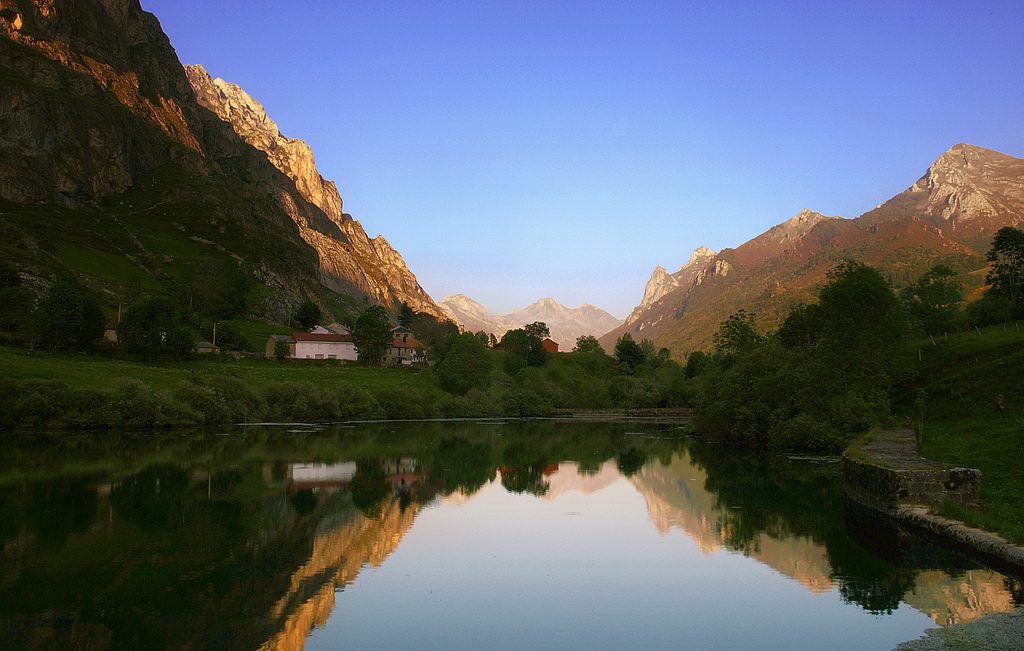 The hiking trails are the main attraction of the Somiedo Natural Park, divided by low, medium or high difficulty, along different areas of the park.

The park has a visitor nature interpretation and reception center, located in the town of Pola de Somiedo, which will be this year’s stage of the Ultra singles and by regional teams of the Spanish Championship and the Spanish Cup of trail running .

If you want to plan a great adventure, make the route to the Lagos de Saliencia, which runs through five lakes of glacial origin in such beautiful surroundings that seems incredible.

Located southeast of the province of Guadalajara, northeast of Cuenca, this natural space covers almost the entire upper stretch of the Tajo River. It is said that this park contains up to 20% of the total plants of the Iberian Peninsula flora, but the undisputed role is played by the pine forests. 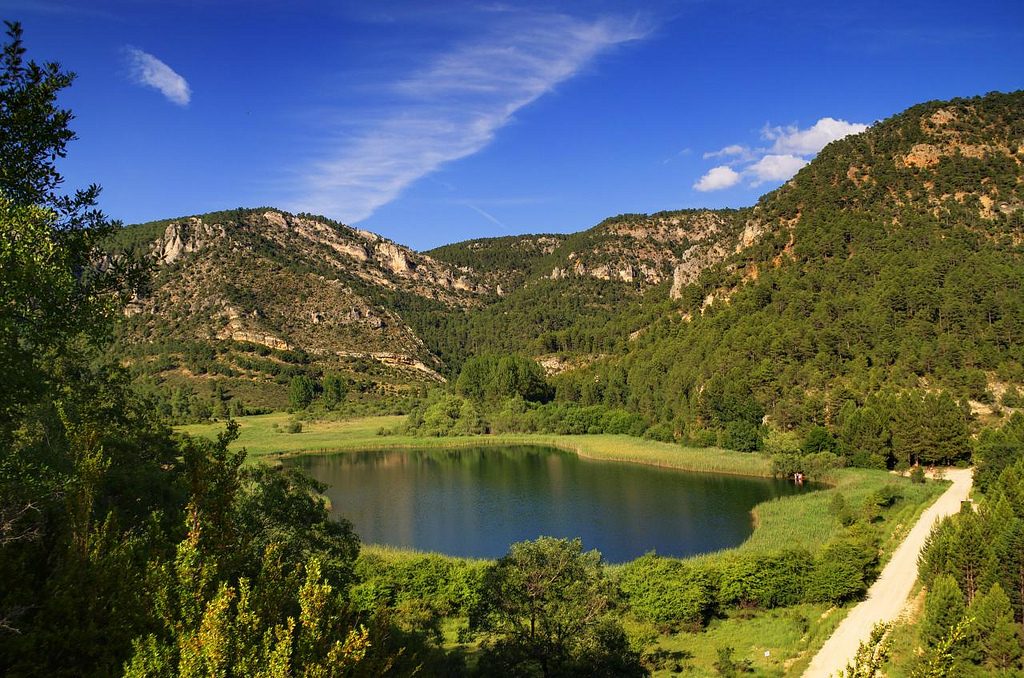 The Alto Tajo Natural Park is the perfect place to enjoy nature and active tourism, so if you love rafting, canoeing, caving or cliff climbing, this is the place for you.

However, the main beneficiaries are hikers, since in the Alto Tajo there are many routes to explore, such as the route of the paths of water, which runs a good stretch of the canyon that gives the name. With ravines, torrents, waterfalls, springs and beautiful lagoons, it is a walk to enjoy. 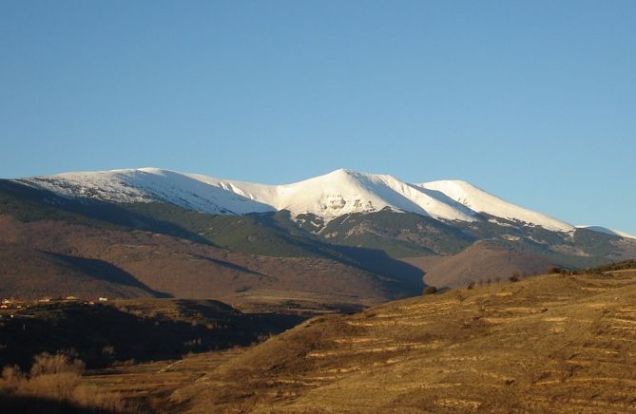 Bordering the province of Soria, on the northern slope of the Sierra del Moncayo and covering part of the Aranda, Campo de Borja and Tarazona regions, there is this protected natural area of ​​more than 11,000 hectares.

With beautiful slopes and impressive geological formations, there are many routes that a hiker can take in this park, which includes monuments such as the Sanctuary of the Virgen del Moncayo and the Sanatorium of Agramonte.

For those who want to combine nature with culture, it is worth going to the Monastery of Veruela, where the poet Gustavo Adolfo Bécquer was staying for a while.

At a 20-minute drive from Bilbao and Vitoria-Gasteiz, between Álava and Bizkaia, there is the Gorbea Natural Park.

It has an area of ​​more than 20,000 hectares, being the largest natural park in the Basque Country, which owes its name to the Gorbeia, a peak of 1,482 meters of altitude. 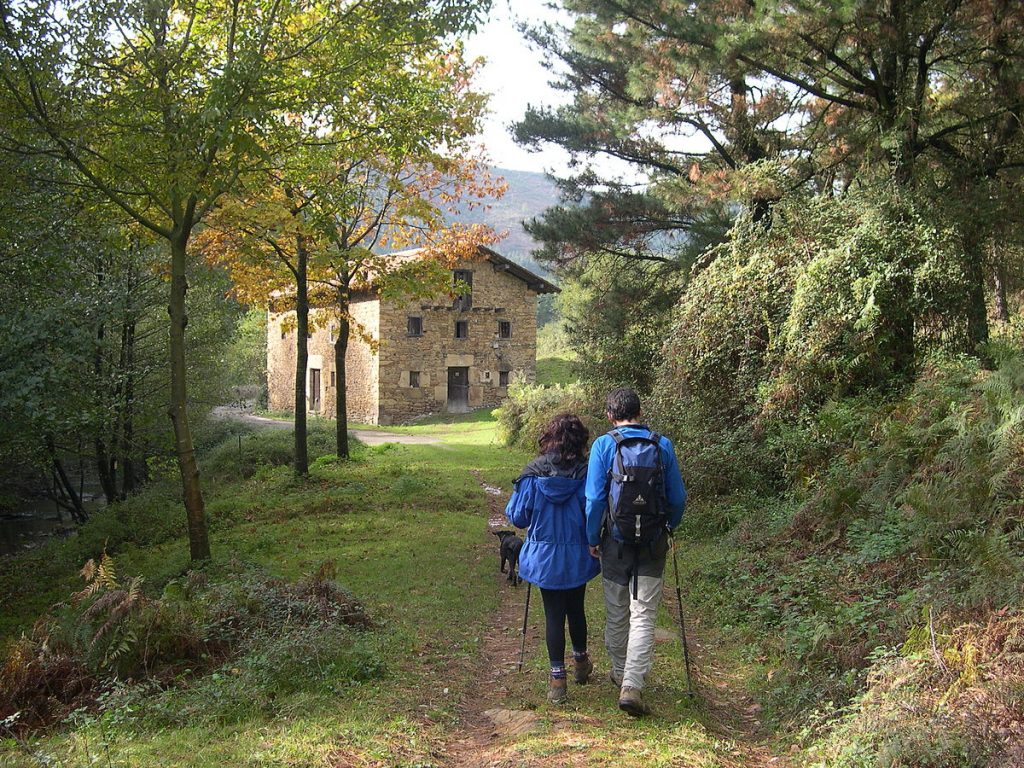 Other peaks of interest are the Peña Aldamin (1,373 meters) and the Peñas de Itxina. Among its natural wealth are holm oak forests, oaks and poplars, places where raptors and mammals live, such as the wild cat or the deer.

This park has unusual landscapes that are worth discovering. So you have to visit the cave of Mairuelegorreta, the Cruz del Gorbea, the waterfall of Gujuli, or the Campas de Arraba, all of them with guided routes. But the walkers will undoubtedly take the opportunity to make the circular route Ubide – Gorbea – Ubide, which allows you to get closer to the most beautiful spots of the largest natural reserve in Euskadi.

This place is full of vegetation, dunes and lagoons that cover part of the provinces of Huelva, Seville and Cádiz, so it can be easily reached by car or train.

The main attractions of Doñana are its trails, being a paradise for nature lovers. These include forest villages such as El Abalorio or Bodegones, in addition to the possibility of sailing and riding.

But if you decide to enter the dunes with your backpack as companion, you will be entering a world that runs between Matalascañas and the mouth of the Guadalquivir River, a space with more than 25 kilometers of virgin beach and white sands.

The Monasterio de Piedra (Stone Monastery), located in Nuévalos (Zaragoza), is a Cistercian building built in 1194 and labeled as National Monument, but its name does not comes from the material with which it was built. It is named after the nearby Piedra River, with marvelous landscapes that include waterfalls, caves and lush riverbank forests.

This natural park attracts thousands of visitors each year, who delight themselves in all kinds of activities, in addition to the almost mandatory visit to the Monasterio de Piedra itself.

The surroundings are full of well-marked trails that run, along about five kilometers, through the most picturesque spots of the park. It is a very quiet route, appropriate to travel with children and pets.

Comprised of the watersheds of the Saja and Besaya rivers, the Saja-Besaya Natural Park is remarkable for its lush vegetation, home of the roe deer, wild boar, wolves, chamois and deer that live among the fronds of its beautiful forests.

It was declared Natural Park in 1988 and with its 24 500 hectares; it is the largest natural park in Cantabria.

The park’s greatest attraction is its large number of trails, ideal for a walk enjoying great sceneries. The oak groves, the beech groves, the holly trees, the birches and the mountain trees of the mountain floor abound. 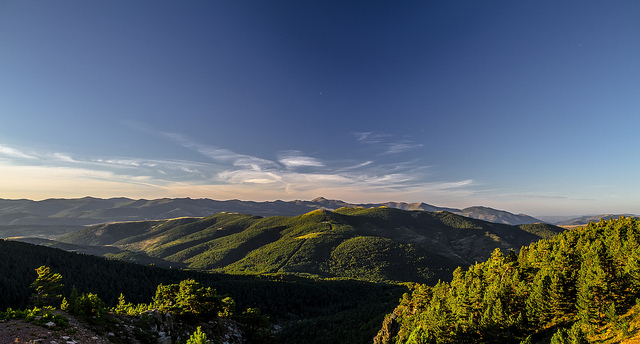 Among the Villoslada de Cameros and Lumbreras municipalities, at about 50 kilometers from Logroño, we found this natural park, the only one officially named as such within La Rioja. With altitudes that reach more than 2,000 meters and an extension that exceeds 23,600 hectares, it is characterized by its extensive forests and small waterfalls.

A lucky hiker who visits it can go the Sendero de la Blanca, Villoslada de Cameros or the Ruta de las Cascadas, any of those three trails ideals to enjoy the best landscapes.

Other interesting places within the park are the Castle of Vinuesa, the Hermitage of Lomos de Orio and the Ethnographic Museum of San Andrés.

In the northwest of Segovia, near the village of Sepulveda, we found the Hoces Del Río Duratón Natural Park, declared of interest on June 27, 1989 by the of Castilla y León government.

It comprises an area of ​​5,037 hectares that offers magnificent views, with a deep canyon that reaches more than 100 meters of unevenness in sections, excavated by the action of the river on the limestone.

All this magnificent nature is accompanied by great geological and architectural beauty, where lies what is said to be the largest population of griffon vultures in Europe. There we can enjoy spectacular routes, besides visiting the caves of the Seven Altars, with engravings from the Bronze Age, the Sepulveda architectural complex, the Monastery of Our Lady of the Angels of La Hoz and the hermitage of San Frutos.

Spread between the municipalities of Argamasilla de Alba, Ruidera, Alhambra and Ossa de Montiel, the Lagunas de Ruidera Natural Park is one of the jewels of Castilla-La Mancha, and one of the most important wetlands in the region. It has a set of lagoons that, together with the rock formations and the flora, make up a natural environment that invites at the same time to rest and exercise.

The biggest attraction is in its lagoons, that to spend the warmer days as if we were on the beach. The park has a total of 3,772 ha, and among its points of interest are the castle of Peñarroya, the cave of Montesinos and the ruins of the castle of Rochafrida.

In the province of Cáceres, between Navalmoral de la Mata, Plasencia and Trujillo, lies the Monfragüe Natural Park. If you are a birdwatcher, you will be delighted there, since on this site we can see the imperial eagle, the black stork or the griffon vultures, among many other species.

With its 17,852 hectares and declared a natural park since 2007, the three most outstanding places in the park are the Mirador del Salto del Gitano, the Mirador de la Portilla del Tiétar and the Monfragüe castle.

Another of its attractions is the quality of the sky for night observation, which makes it ideal for night photography.

What do you think of our list? Do you think it’s complete, or have we omitted your favorite Nature Park? Whether you want to tell us your experiences in one of these magical places or wish to contribute with another of your own, leave us a comment. Who knows? Maybe we will meet some day in one of these beautiful natural parks of our beloved Spain.

5 thoughts on “15 most beautiful natural parks in Spain”