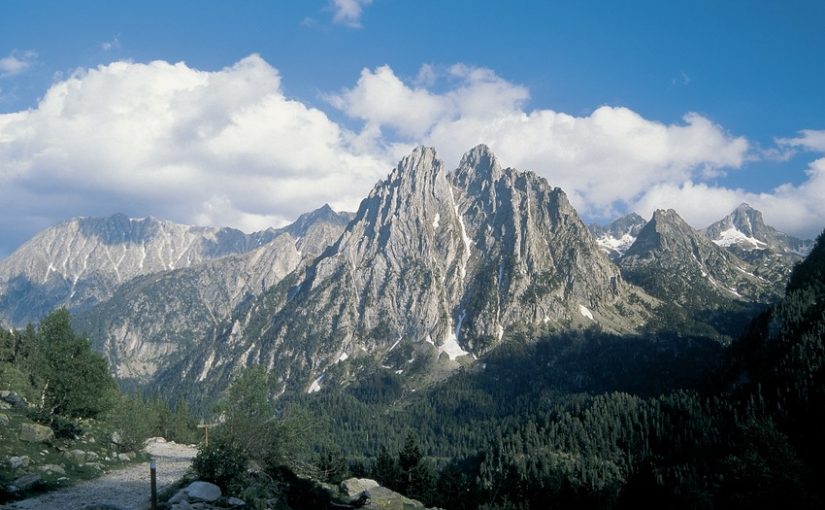 The Pyrenees, a mountain mass that runs through the territories of Andorra, France and Spain, has historically been a challenge for hikers. This natural border between Spain and France covers a range of 425 km in length and 80 km in width, where there are plenty of spectacular places for hiking, due to its combination of mountains, high peaks, volcanoes, rivers and glaciers.

From Walkaholic we bring you 9 of its most beautiful and demanding routes, which are all hikers delight. The information needed to plan and visit those trails is included in our application, so be prepared to conquer the Pyrenees this winter!

The great routes of the Pyrenees

Being this massif one of the largest in Europe, it is not surprising that it is a true amusement park for professional hiking. Of course, you must take the corresponding precautions since the Pyrenees will know how to punish those who do not keep due respect.

Many magnificent routes cross the Pyrenees (without counting their variants), only from the Spanish side. As is logical, it is difficult to make a top of which of them are the most recommended for a hiker, since each of them has spectacular natural favors. However, there are two that we cannot fail to highlight:

GR-11, Great Route of the Trans-Pyrenees

Also called the Pyrenean Trail, this route is one of the most demanding. It has approximately 840 km and a cumulative  elevation gain and loss 39,000 m, but defining exactly its high is difficult due to the demands of the terrain. Normally, this great route is designed to be carried out in 44 stages, however there are hikers that have managed to complete it in 24 days and even less.

A little (only a little) less demanding is the GR-15, which runs parallel to the GR-11, further south. It is the so-called Pre-Pyrenean Path, which leaves from Pont de Suert and reaches the Vértice de Algaraieta with a route of 240 km and 14 stages between both points. This great route is divided into variants GR-15.1 and GR-15.2.

Due to the fact that it crosses the massif on its less elevated Spanish side (generally at less than 2000 meters above sea level), it is a magnificent challenge to overcome before attempting a high mountain route such as the GR-11.

Now, if we talk about very interesting trails of lesser length, there will always be some that stand out in the Pyrenees.

7 spectacular routes in the Pyrenees

In the Broto Valley, in the Aragonese Pyrenees, Torla is the entrance to the Ordesa y Monte Perdido National Park. On it the route to Bujaruelo is made through bridges, forest roads and mountain shelters on the banks of the Ara River. Then we move towards Ordiso going up the Ara, and finish at the Viñamala peak on the French border.

In the Catalan Pyrenees we can enjoy alpine landscapes and softer mountains, thanks to the National Park of Aigüestortes and Estany de Sant Maurici, in Lleida. Among its many attractions is the trail to Estany de la Llebreta, 14 kilometers round trip. Starting from Palanca de la Molina, the valley of Sant Nicolau is traced with its meadows, waterfalls and meanders, which combined with the Lleida peaks and the conifer forests, give this path a bucolic atmosphere. All this marked with many Romanesque churches, declared World Heritage.

These small lakes along the Aragonese Pyrenees are of medium difficulty, but they are well worth it. Its icy waters, crystalline and of an intense blue surrounded by great imposing mountains, make of the blue Ibones a sensational photo and a walk that you will always remember. The route begins at the Casa de Piedra refuge the Aragonese Mountaineering Federation, following the course of the Caldarés River to the Bachimaña Refuge, to culminate in the Ibones.

Also in the National Park of Ordesa y Monte Perdido, highlights the Faja de las Flores trail. Only suitable for experienced hikers, this path runs along a wall of the Ordesa glacier cirque, with an cumulative elevation gain and loss of 1,400 meters. Needless to say, the landscapes will take your breath away, and it is the perfect route to prove ourselves.

In the Navarrese Pyrenees, the massif descends below 2,000 meters on a regular basis. Here everything is dominated by greens, offering a more sedate but not less exciting hiking. Perhaps its best example is the ascent to the Ori peak, which marks the change of landscape between Navarre and Aragon. Although it is a climb of medium difficulty, the trip from the port of Larrau to the top of Ori skirts the mountain giving marvelous landscapes.

This trail goes from the town of Estana in Lleida, with only 22 inhabitants, to the slopes of Cadí, the mountain that names a whole mountain range. They are more than 7 kilometers of low slope, but the reward is well worth it when you reach the meadow at 1,800 meters, the perfect viewpoint to fill your eyes with the beauty of the Cadí-Moixeró Mountain Natural Park.

To end our top, we have chosen the most famous excursion in the Ordesa Valley. With an average difficulty, this trail can be traveled in about 3 hours one way and is affordable for any seasoned hiker. From the Meadow of Ordesa we take the path of Soaso, finding waterfalls, caves and beech and black pines forests all the way to Las Gradas, where the river forms steps, up to the Cola de Caballo waterfall.

The most cautious can take the same way back, while the really brave ones have the Path of the Hunters to prove themselves as hikers. You can even continue a little further on, and reach Refugio de Góriz. The climb may take 2 more hours, but it is well worth appreciating its outstanding natural beauty.

You will ask us, a top of only 9 items? We want you to participate and tell us which Pyrenees trail you would add to this list. You can also tell us about your experience in this hiking paradise and leave your comments and concerns below.

5 thoughts on “Top of hiking trails in the Spanish Pyrenees”