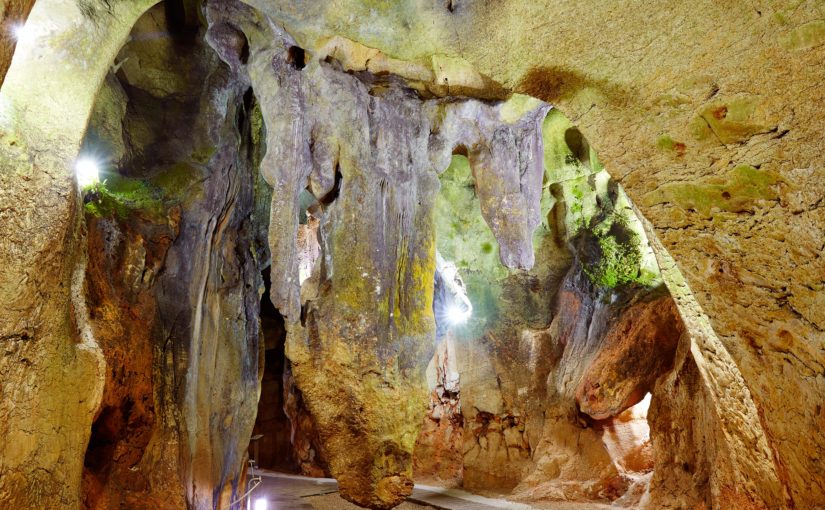 Are you a cave lover? If that is your case and you are in Spain, there are many fantastic places that you can visit to satisfy your interest.

You don’t need to be an expert to enjoy them, because our country has one of the largest cave networks in Europe, many of them prepared to receive tourists.

Thus, the visitor can admire the work of nature, which for millions of years has built these underground places that amaze with its beauty and amazing architecture.

Therefore, from Walkaholic we invite you to know about 8 spectacular caves to visit in Spain, that we are sure that you will enjoy them.

With more than 20 km in length, 4 of them are open to the public since 2005, this cave is located in the municipality of Valdáliga. The Cave of El Soplao was discovered in 1908 as a result of mining activity in the area.

After advancing 50 meters through a mining gallery, you will reach this cave that houses pearl and aragonite nests, in addition to the usual stalactites and stalagmites. Also, interestingly, it has a large number of stalactites called eccentrics, which grow in all directions.

Cave of the Enebralejos (Segovia)

The Cave of the Enebralejos is located near the town of Prádena de la Sierra. In this cave were found paintings and engravings that have been dated approximately from the year 2,500 BC.

That and its many speleothems confer to this cave a great tourist interest, but being a protected area can only be accessed on guided tours. It was discovered in 1932 and opened in 1995. Visits last about 45 minutes and cover 500 meters of cavern, of the 3 km it has.

The Nerja Cave is a 4 km cavern that has almost all types of speleothems that are known. Discovered in 1959, it opened to the public in 1960, although not all rooms are accessible.

However, it is a show worth enjoying, especially the Cataclysm, the Torca and the Ghost rooms. In these last two there are traces of the hand of the prehistoric man, especially some cave paintings of seals dating back 42,000 years. Perhaps, it is the first work of art known to mankind.

This cave has been declared of Cultural Interest with category of Archaeological Zone since 2006.

With 6 large rooms to be visited and a variety of impressive structures, this cave is undoubtedly one of the most beautiful in Spain. It is near the town of Vegacervera, in Valporquero de Torío.

Its 1.3 km long route on the upper level has been enabled since 1966, although the lower level has 3.1 km more of galleries. These are only accessible to cavers and experts.

However, visiting the rooms Small Wonders, Great Rotunda, Fairies, Stalactite Cemetery, Great Road and Wonders (with its small underground lake) are more than enough for the tourist to be amazed.

Warm clothes are recommended, since the temperature inside the cave remains constant at 7 degrees Celsius throughout the year, with a 99% of humidity.

Discovered in 1945 and open to the public in 1948, the Campanet Cave is located located on the southern slope of Mount Puig de Sant Miquel, in the Tramontana mountain range.

It has an area of ​​3,200 m2, for a journey of about 400 m that lasts about 40 minutes along several galleries and rooms. Among them, you can visit the romantic room, the lake, the enchanted castle, the palm tree room and the sound waterfall.

In addition to its stalactites and stalagmites, this cave stands out for containing fossil remains of the Myotragus balearicus, an endemic bovine of Mallorca and Menorca that became extinct about 4,000 years ago.

Cave of the Wind (Tenerife)

More than a cave, this is the longest volcanic tube in Europe and also occupies fifth place in the world. It is located north of Tenerife in the municipality of Icod de los Vinos, and is also the most complex volcanic tube known.

It has more than 17 kilometers with three levels of passageways, full of chasms and lava terraces. The cave includes other connected cavities, such as the Belen cave, the Piquetes cave, the Sobrado cave and the Breveritas cave. 7 access ports have been discovered so far.

Human remains of the Guanches and fossils of the extinct species Gallotia goliath and Canariomys bravoi have also been found in the cave.

Due to its importance, this cave could not be absent from our list. Inside it, the most important representations of Paleolithic art were discovered.

It is not very large, but in its 270 meters in length it has a large hall that was very appropriate for the life of our ancestors, who expressed their daily life in cave paintings. Sealed by a landslide 13,000 years ago, they were discovered in 1868, although they did not gain fame until 1880.

Declared in 1985 World Heritage Site by Unesco, in 2001 a Museum and replica was opened next to the original cavern, so that visitors can get an idea of ​​its beauty without damaging the fragile cave paintings.

Grotto of the Wonders (Andalusia)

It is located in the urban center of Aracena, on Pozo de la Nieve street next to Plaza de San Pedro. This cavern was discovered by a pastor in 1886 and was opened to the public in 1914, being the first tourist cave in Spain.

In total, the Grotto of Wonders has more than 2 km, and 1,200 m of them can be walked. The visit begins in the Hall of Shells and reaches the Great Hall of the Lake. Then you descend to the Emerald room, glassware of God and finally the Nudes.

If you love to see vertical and eccentric stalactites, stalagmites, castings, listed curtains, aragonites, coraloids, gours and underground lakes, the Grotto of Wonders fulfills what it promises.

What do you think of our selection? Of course we can’t mention them all, so if your favorite cave is not included, mention it in a comment.

You know, in addition to putting on your boots, don’t forget your essential flashlight for hiking, and let’s discover together these and other spectacular caves to visit in Spain.