During the past easter of 2017, I did with a friend of mine El Camí de Ronda (Catalan) or El Camino de Ronda (Spanish). It was a 5 days trek through the Costa Brava (Girona), to one of the most famous trekking routes of the Mediterranean.

This coastal path got formed during the 19th century, due to small footprints through the cliffs. But during the 20th century, it was used by the Guardia Civil (Spanish military forces) to prevent smuggling. Nowadays, this beautiful trekking route, has only leisure purposes. You can either walk it by parts or in a row.

You can start the trekking route at the North of the Girona province, in Portbou, and go until the South of the Tarragona Province, in Ulldecona. Apparently it actually goes all the way down to Malaga, in Andalusia. The difference between regions is big, and the worst one is the part of the Valencian Community, which is not signposted at all. The length of the whole route of El Cami de Ronda through Catalonia is 583 kilometers, and you could check the itinerary of the Catalan path here.

Here I have embedded the mix of the GR-92 route that goes along the coast of Girona province, which also includes part of the GR-11 route through the Natural Park of Cap de Creus. I have added the drinking water points we found on the way, in order to make it easier for you, and in order to avoid buying bottled water. I have also added the locations where we slept, as well as the birds viewpoints that we found on our way through the Parc Natural dels Aiguamolls de l’Empordà.

If you prefer the Wikiloc route, here you have a good one that goes through all the Catalonia coast. But I definitely recommend the GR-11 subroute that reaches Cap de Creus.

To do the trekking, we used our hiking Android app, which now supports GPX track imports. As you could see, the drinking water locations and the routes are properly displayed there too. When you get into cities, keep in mind that it can be a bit tricky to follow the whole GR-92 signs. In those cases, opening up the Google Maps or Walkaholic app can come in handy to continue.

My friend and I decided to do a good chunk of it, since we had 5 days and 4 nights available, from Llançà to Pals, our original idea was to reach Begur and Tamariu as well, but a friend of ours drove us to Barcelona from Pals on the 5th day.

There are other options by train from France to Portbou or Llançà, for example from Perpignan. So it shouldn’t be a big deal to reach any of those destinations.

To come back to Barcelona (or Girona), you could use the bus service of Moventis (Sarfa). The routes connect several towns of the coast of Girona with Girona airport and Barcelona airport. You won’t find many options, since the towns of the province have a poor transport infrastructure.

Route from Llançà to Pals

We combined the routes GR-92 (Cami de Ronda) and GR-11 (Senda Pirenaica), since I had heard that it was a really great mix. Do not miss also the part of Begur, Tamariu or Calella de Palafrugell, in the Southern part. Probably as worthy as the part of Cap de Creus or even more.

Our exact route was this one:

Since we were going with a camping tent, we had to plan a little bit where to sleep, in order to not have to open the tent and sleep in a park or in a beach in one of the cities / villages we were passing by. Since I knew the area quite alright, because I lived there during a year on 2014, I chose to avoid the bigger places as a near destination where to sleep, and decided to camp in quiet areas:

Details of the route from beginning to end

From Llançà to Cap de Creus could be a bit challenging if you follow the route I displayed on the map. From Port de la Selva to Cap de Creus has no water resources you could use to drink, so be sure of bringing with you at least 2 liters. It took us approximately 5 hours to do the hike between Port de la Selva and the lighthouse of Cap de Creus. By the way, don’t be surprised to pass near the cows, they are peaceful. If you make it to Cala Tavallera, going down and up from there is exhausting. Take your time, your knees might thank you for that on the day after.

As soon as you approach to Cap de Creus, views become simply amazing. Aside from that, there are one restaurant, one bar and a public toilet (without drinking water). Inside of the restaurant, you can go to the toilet and refill your bottles with fresh water. It is a nice area to look for a sleeping place, there are plenty of creeks and small trees that will cover you from the wind. We chose a little creek, far away from the main path between Cap de Creus and Cadaqués. About 2 kilometers on foot from the lighthouse.

On the 2nd day, we followed the GR-11 route until we got to Cadaqués, where we had a pleasant coffee. Then we bought food from the supermarket and refilled our bottles with water. Since I knew we had to walk a lot to get to Roses, I got 3 liters of water this time. Keep that in mind, the path between Cadaqués and Roses is long, and dry. There are a few places where you can get some food and/or water on the way, if you go along the coast, following the GR-92 route (there are no bars or restaurants if you don’t choose to go through the coast) . It took us more or less 6 hours and the weather was fantastic.

After a quick stop in Roses, to get food and water, we went to Empuriabrava. There is where we slept, right at the beginning of the Parc Natural dels Aiguamolls de l’Empordà, in the beach.

Honestly, I was gladly surprised with the Parc Natural dels Aiguamolls de l’Empordà. It’s incredible the amount of birds and different species you can find there, specially during the early morning. Around 7AM we woke up, quickly packed our tent and got some food for breakfast.

Right after, we wanted to cross a part of the natural park through the beach, but from April 1st to June 30th, there is a kind of bird that is being protected there to allow them for a proper environment. Apparently this species is endangered and they are promoting the breeding of small birds. So during that period of the year, you are not allowed to cross the beach next to the park, from Empuriabrava to the estuary of the river Fluvià, next to Sant Pere Pescador. Actually that ended up being a great thing, since we went to the natural park and cross it, enjoying the various birds viewpoints, like the one on the picture, which were perfect for bird spotting. My friend is actually a bird lover, and he enjoyed like a child.

After seeing the natural park, we head to Sant Pere Pescador, bordering the Fluvià river. One more time we got food and water, in that village, and then we continued to Sant Martí d’Empuries. Here we tried to look for a small greengrocers or a supermarket, but there were none. Since we didn’t have enough food with us, we decided to take some in one of the bars in the town. Happily, we were under a roof when it started raining heavily. It lasted around an hour, and after that we made it to the beach near the town to settle our tent and got some rest, since we had been walking with a blister during that day.

However, the wind was our company during the whole night. If you do El Cami de Ronda out of the warmest months (June-August), check the clothing. I’ll recommend you to bring a windproof jacket and perhaps thick clothes for sleeping, or a great sleeping bag. Mine had a comfort temperature of 10ºC and I was a little bit cold one of the 4 nights.

Last day we had a great sunrise, no wind, no rain and lot of energy to continue, so after packing our things, we started going to l’Escala. On the way there, we stopped at the supermarket to get provisions for the night, and got some water in the center of the town.

As you could observe in the picture above, the way through the natural park of Montgrí was beautiful and green. Lots of nice paths, quite shadowy, and with stunning views. Near the Montgrí Castle, though, it is a drier area and has just a few trees.

By the end of the day, we got to our final destination, in La Gola del Ter, the estuary of the Ter river. We spent the afternoon chilling out in the beach, enjoying the soft wind and mild sun. From there you would have an excellent view to the Medas islands. Beaches near the estuary are very wide, have dunes with protected areas and not so many people.

Issues while crossing the river Ter

Before setting up the tent, we realized that the Ter river had too much water. I knew there is a bridge that crosses the river in Torroella de Montgrí. However we weren’t willing to make the 30 kilometers to go there and come back to the beach. That will take us a whole day of walking. Instead, we got our clothes out and checked the depth of the river. We then picked our things and made it to the other side of the river. Very refreshing way to end the day!

During the summer and early autumn, the river is low and you can cross it by foot. Anyway, I was keen to take the risk, since the beach there is very beautiful. 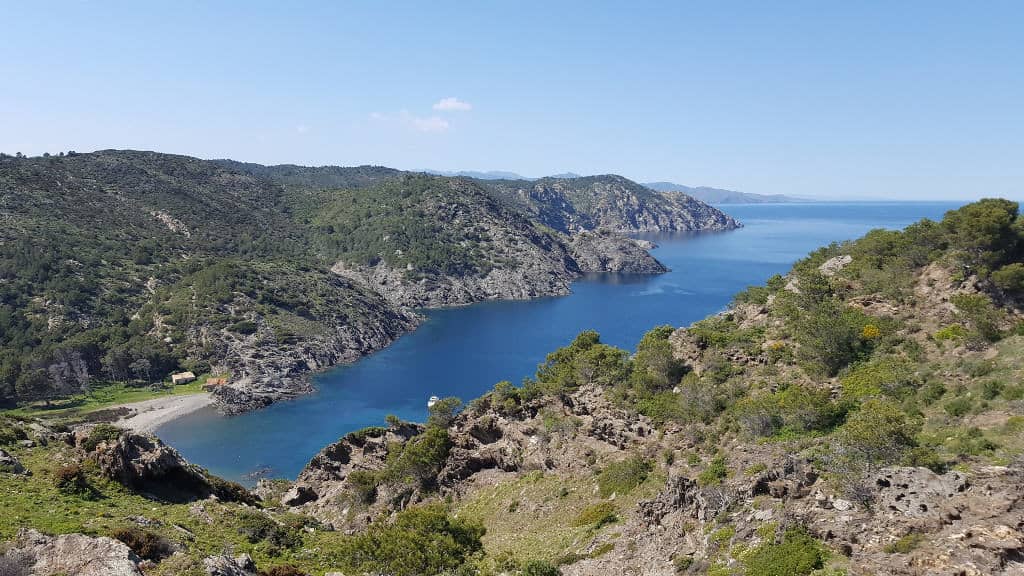 One thought on “Camí de Ronda, the longest trekking of the Costa Brava”