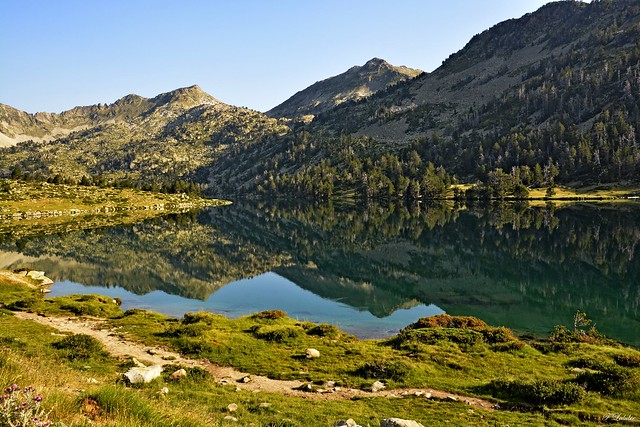 As a natural barrier that marks the border between Spain and France, the Pyrenees are one of the most renowned mountain ranges in Europe.

While it is true that Spaniards have the privilege of enjoying the beauty of its southern slope, which separates Guipúzcoa, Navarra, Aragón and Catalonia from France, the French Pyrenees on its northern side are also a source of surprise and admiration for its visitors.

Therefore, from Walkaholic, we suggest some special routes to immerse yourself during this summer in the freshness of the mountain landscapes of the French Pyrenees.

For a total round trip time of 4 hours and 13 kilometers, this route begins in the Aragonese Pyrenees but takes us also to explore the natural beauty of the northern side.

With a 650 meters slope, this route is perfect to travel in summer, because we can take advantage of the ski lift of the ski resort to save us a good stretch. This works continuously from 9:30 am to 5:30 pm.

From there, we arrive at the border pass of Puerto de Jaca, to walk through the area of ​​the lakes of Ayous in the Parc National des Pyrénées.

On the way we will pass through the Astón and Escalar lakes and on the French side through the Lac Bersau and Lac Gentau. There is no shade during the tour, so protection against sunlight is essential.

In the Eastern Pyrenees, the area around Lake de la Bollosa is included in the parcels of the Parc naturel régional des Pyrénées catalanes.

Being one of the 51 French regional parks, this area is good to hike, and also to the ascent of peaks such as the Carlit and Puig Peric. But if we want a day to share with the whole family, summer is the ideal time.

Very easy, with very little slope and to travel its 4 km in just 2 hours and fifteen minutes, we leave the shelter of the Bouillouses to take the GR-10 to the Tet river and reach the Bolloseta.

After some forested hills we advance to the plain of Les Bones Hores, with the river Angostrina on the right to the Estany de la Pradella with its magnificent views of the Carlit peak.

Bordering the lake, we reach a short descent that takes us to Estany Negre. From there you reach Estany Llarg, and 20 minutes away from the point of return of the route, the small lake of Racó. To get back to the starting point, we must take the GR-10 up to the refuge of Las Bouillouses and its lake.

Located in the Vallée d’Aure in the French Pyrenees, this circular route can be completed in about 3 hours and 45 minutes. With an approximate length of 9 km and a slope of 404 m, it lays within the Reserve Naturelle de Néouvielle.

This is one of the routes that can only be done in summer, because in winter the road is cut.

Starting from the Lac d’Orédon Parking, the lake borders the pine forest known as Pinède des Passades d’Aumar. With a series of short loops we gain height, being able to admire along the way some small waterfalls.

In an hour or more you will reach the area of ​​Les Laquettes, small interconnected lakes, from where you will go to the lake of Aubert and then to the Lac d’Aumar. For the return, you can return by the same road, take the GR-10 or use the paid bus from the Aubert and Oredon parking areas.

The circular passage of Pass’Aran

This is a demanding high mountain hiking route, thought to be completed in 5 stages and that runs both in Spanish lands (Stages 1 and 5) and in the area of ​​the French Pyrenees (Stages 2 to 4).

Despite its 70 km of extension in the whole circular route, its technical difficulty lies in the fact that it is a route with daily slopes of 1400 meters, so it is only available to experienced high mountain hikers.

There is no mystery here more than ascending to peaks near 3,000 meters above sea level to descend to beech forests  at just over 900 meters high, but the reward is to visit landscapes as different as they are fascinating each day.

To assure a good trip, we recommend purchasing the Pass’Aran pass, which guarantees accommodation in mountain shelters at the end of each stage:

Some of the most interesting points of the route are the Valier Massif, Lake Milonga and Pico de Crabère.

This is one of the most famous sites of the French Pyrenees, not only for its rocky wall of 1500 meters high and its palette of calcareous, gray, ocher and pink colors.

In this beautiful natural cirque springs the waterfall of Gavarnie, which is the highest in France and the second in Europe, with its 423 meters. This mark is the beginning of the river Gave de Pau and can be accessed from the beautiful French town of Gavarnie, and taking the path to the waterfall, a short half hour from the town.

We propose this circular route to Cirque de Gavarnie, which is 9 km long and about 3 hours long.

Another of the highlighted spots that can be visited in the area is the famous Brèche de Roland, a 40-meter wide door on the rocky ridge, which is said to have been opened by Charlemagne’s nephew while trying to break his Durandal sword at the end of the Battle of Roncesvalles.

What do you think of our suggestions for hiking in the French Pyrenees? Although you surely agree that they are magnificent, your favorite may not be on our list.

If so, we invite you to leave us a comment.

Who knows? Maybe one of these days we are in the Pyrenees, enjoying an unforgettable experience.