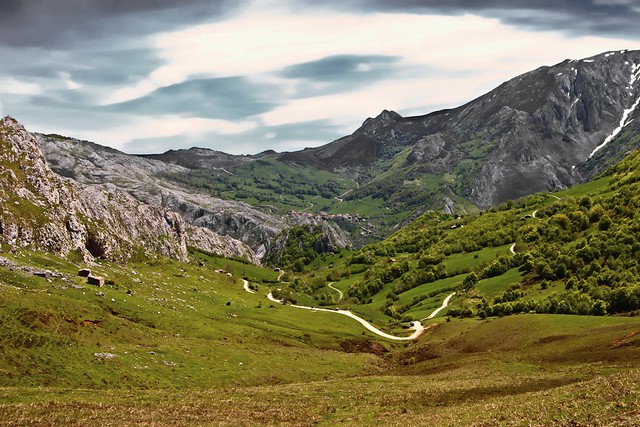 Located on a ledge between the sea and the mountains, Cantabria is one of the northernmost regions of Spain that enjoys luxurious landscapes and good weather.

Cantabria has more than 600 km of well signposted trails cover its extension in all directions, so hikers may choose between walking along the coast, the mountain or green valleys of rich flora and picturesque villages.

Furthermore, Cantabria was populated since before 37,000 BC., fact that is demonstrated by the paintings of the Altamira Cave, declared World Heritage Site.

For those who want to discover the secrets of this region, from Walkaholic we suggest 5 of the best hiking trails in Cantabria.

With a length of 12 km, along stone paths, mountain trails and roads, this route can be done in 3 hours and a half with ease.

It begins on the seafront of Santoña. From there some stairs depart that take us to the San Martín Fort.  From there we ascend to La Punta del Fraile, where we can admire the Candina peak, the Basque Coast and cliffs of more than 100 meters towards the sea.

Our next stop is the Faro del Caballo, or we can keep going between laurels and holm oaks to the Faro del Pescador.  From this point we take the road to Punta del Águila, overlooking the beaches of Berria and Noja, separated by Brusco.

Our route then passes through the Barrio del Dueso, the fort of Mazo, the viewpoint of Casablanca, and ends at the Fort of San Martín.

This is one of the most important routes in Cantabria, in the northeast of the Picos de Europa National Park.  Fuente Dé is a common destination for many of the routes that pass through the area.  Located in the Liébana Valley, it enjoys nearby glacial circuses and beech trees of singular beauty.

The route is ideal for all hikers and begins with the ascension by cable car of Fuente Dé in the Horcadina de Covarrobres.  The circular trail then travels 15.3 km bordering the Collada de la Junciana and the Pico de Valdecoro.

It can be done in 5-6 hours, and it leads us not only to contemplate the majesty of the Picos de Europa, but also magical places such as the Nevandi River or the Serna Forest, before returning to Fuente Dé.

For those who love a full day of hiking, this circular tour will be magical.  With a total length of 19.7 km, the small path PR-S 75 is done in approximately 9 hours, so it is better to start early.

The route departs from the town of Vega de Pas, until reaching the Yera River.  Following the riverbank, we find numerous waterfalls and stone bridges in our path.  The route is well signposted, and it continues until “El Enverao” and the “Antigua Estación de Yera”, now abandoned.

Using the railroad track, the El Morrito, El Morro, El Empeñadiro and El Mayoral tunnels are to be passed. The road then descends to the Aján stream, with more bridges and waterfalls, until we return to Yera and from there to our departure and return point in the Vega de Pas square.

Route of the Pasiegos Valleys and the Alto Caracol

With a total length of 13 km, a slope of 600 meters and a journey time of 5 hours, the Pasiegos Valleys is another of the hiking trails in Cantabria that are worth traveling.

Green places, mountains as background and small but well-kept villages make up this panorama.  Precisely in one of these, the town of La Concha in San Roque de Riomiera, begins our route.

During the march, not only the valleys of Miera and Pisueña are crossed, but we will ascend to the Alto del Caracol, a mountain pass among valleys, from where we will have the best views of the landscape.  The route is circular and is considered of intermediate difficulty due to its slope, but it is well worth it.

We are talking here about the longest gorge in Spain, so this classic Cantabria trial could not be out of our list.

The Gorge of La Hermida is located on the Picos de Europa border, and it is a 21 kilometers long gorge with walls that exceed 600 meters high.  The Deva River is responsible for such beauty, sculpting the landscape for centuries to obtain this beautiful place as a final result.

The circular route that we propose is 14 km long and can be traveled in about 5 hours.  It has a strong slope, but the path is well signposted and the slopes are not steep, so it does not require great experience.  It starts from of the town of Cicera, following the path of the “Riega de Cicera” until it connects with the “Riega de Santa Catalina”.

Among lush forests we reach the Mirador de Santa Catalina, which offers us one of the best views of Cantabria, also known as the Bolera de los Moros, due to an ancient Arab fort of the eighth century.

Then we descend to the CA-357 road, which takes us back to Cicera.  Another option is to visit the Mirador only, for which you can leave the car in the town of Piñeres and from there walk 2 kilometers to the Mirador de Santa Catalina.

While any of these routes will delight hiking enthusiasts, there is much more to see in Cantabria.  If your favorite trail is not included in our list, leave us a comment so that the Walkaholic community benefits.

Who knows?  We may find ourselves on the road any of these days, walking the most beautiful hiking trails of Cantabria.