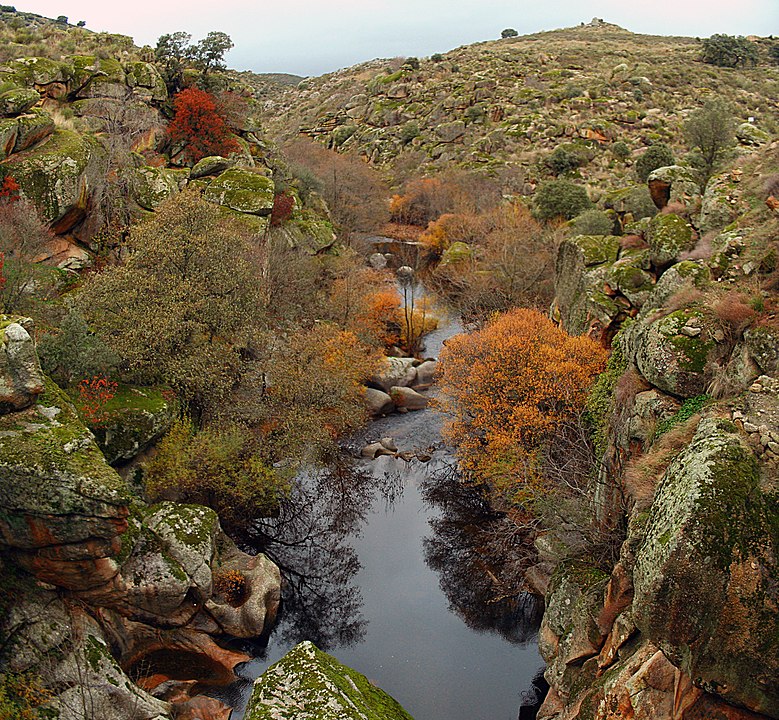 Extremadura not only has the two largest provinces of Spain, Cáceres and Badajoz.  It is also one of the most unexplored regions, and the mountain ranges of both provinces offer pleasant surprises to hiking enthusiasts.

In this frontier with Portugal, steep hills and mountains are balanced with forests and river valleys, olive groves and pastures with flora and fauna, to make a true feast for our steps.  As a dessert, Extremadura is full of history; ranging from cave paintings of the Paleolithic to beautiful monasteries of various periods.

For all this, from Walkaholic we suggest 5 hiking trails in Extremadura, full of charm and ideal to know this beautiful Spanish region.

Let’s start with an easy circular route to relax among oaks and chestnut trees in the Ambroz Valley, within the Sierra de Gredos.  This hike can be done in about 3 hours, and it takes us along almost 10 km with a slope of approximately 330 meters.

It begins and ends in the parking lot of a recreational area near the Hervás town.  After 400 m of pavement road we enter a forest track with yellow and white markings.  The track goes through the chestnut to a path that previously linked Hervás with Gargantilla, which we will follow to return to the parking lot.

In the end, the route leaves a pleasant peace of mind, especially if it is traveled in autumn.

Also near Hervás, we can travel this route that shows us a totally different landscape. Listed as easy (although it requires some physical preparation), the Chorrera de Hervás trail covers approximately 7.5 km with a slope of 350 m, which can be overcome in 2 and a half hours.

Most of the road takes advantage of the infrastructure built for the Hydroelectric Power Plant and the Casa de la Luz of the Ambroz valley.  This short trail starts at the Horcajo Reservoir parking lot. From that point we go to the Arroyo del Posturillo bridge to reach the houses of Marinejo.  We follow the track until we find a small path that runs between oaks and leads to a crossroads, that points the way to the Chorrera de Hervás, the hardest part of the route.

From the top we arrive at the Mirador de Hervás and, after a good photo session, we return to the path descending to Arroyo de las Costeras.  Later, we retrace our steps to the road junction and take the path of the green ponds, on the banks of the Ambroz River, to end the walk and return to the Horcajo reservoir parking lot.

Route of the Jayón King (Badajoz)

Near to the border with the province of Seville, this route covers several architectural landmarks in a demanding walk of about 22 kilometers to be traveled in around 8 hours from the Jayona Mine to Llerena town.

The route begins in this place of the municipality of Fuente del Arco: an iron mine that closed in 1921, but was reopened as a natural monument in 1947. It is worth seeing before hitting the road, due to the large number of birds that nest there and its unreal galleries and floors.

Already on the way, we descend from the Jayona Mine to the Virgen de Ara hermitage, among olive trees and oaks.  From there to Llerena a difficult terrain awaits us with many ups and downs, but it is a good price to enjoy the Arab Alcazaba de Reina and the Roman theater of Regina.

It may not be as famous or long as the Carlos V route, but this trail of about 15 kilometers is equally spectacular and can be done in about 4 hours.

The route starts from the town of Cañamero, following the Ruecas riverbed.  After several kilometers a bridge appears, which we will cross towards the Dam of the Cancho del Fresno.  Once this reference point is reached, we take the road to the Collado del Ventosillo, with the Cruz de Andrade and the Castaño Abuelo as places of interest.

The next objective is the Mirabel Hermitage Farm, a 15th-century building where the Catholic Monarchs used to rest. From there we will reach the Hermitage of Santa Catalina and the Guadalupe River, and then enter the town to the Nuestra Señora de Guadalupe plaza.

Route through the Extremaduraˈs Siberia (Badajoz)

Yes, Extremadura has its own Siberia.  It is at the northeastern end of Badajoz and is formed by 18 municipalities, with a large layout of routes and trails to see landscapes that do not have to envy to the ones of high mountains.

The route we choose is not intended to walk through the swamps of the region, but to lead us through the most picturesque villages in the region, in a 24 kilometers and about 6-8 hours of walking.

First of them, Navalvillar de Pela will serve as a starting point.  But first we must visit its Periurban Park “Dehesa de Moheda Alta”, magical to contemplate cranes in winter.

Next stop is Casas de Don Pedro at about 11 kilometers that can be covered in 2 and a half hours, in a trail marked by streams and the surprising nature of Extremaduraˈs Siberia.  When you reach the town, be sure to visit the San Pedro Apóstol parish church and the Virgen de los Remedios hermitage. It is also an excellent place to taste some of the rural cuisine of the area.

Then we continue to Talarrubias: a march of 13 kilometers to be travelled in three hours.  To get there we must cross the waters of the Orellana and Sierra Pela reservoirs, a declared area of ​​Regional Interest.  We ended up our day touring Talarrubias, where several civilizations have passed, each leaving their contribution to local history.

What do you think of our recommendations? Of course, there are many other routes to enjoy in Extremadura and we cannot cover them all.  Some are as popular as the Route of Carlos V or the Route of Garganta de los Infiernos and we prefer to suggest other less known.

But if your favorite path is not among those we have mentioned, it would be great if you leave us a comment so that we can all benefit from your experience.

Who knows? We may meet any of these days along the way, walking the best hiking trails of Extremadura.