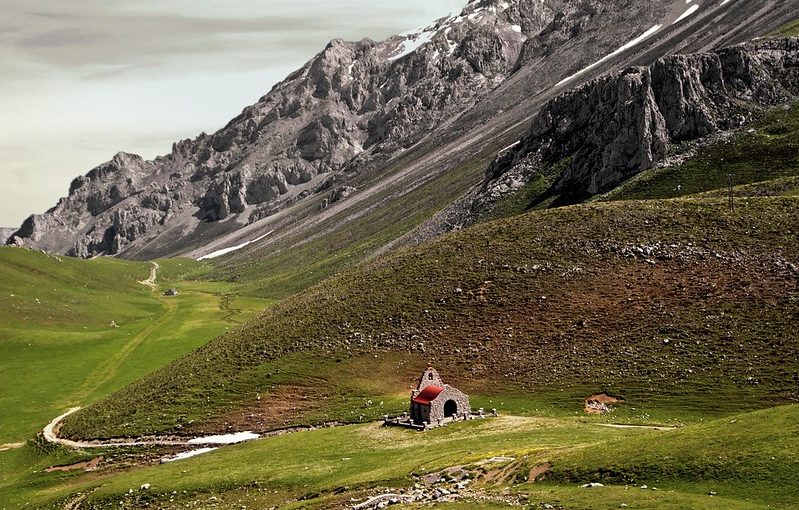 There is a lot to explore there, as the park extends through the Principality of Asturias, Cantabria and Castilla y León.  It is divided into three massifs, western, central and south, so hikers and mountaineers can enjoy its diversity and high peaks.

Therefore, from Walkaholic we will suggest 7 spectacular walks for all levels of experience and physical preparation, so you can enjoy the Peaks of Europe at your leisure.

We start in Cantabria, in the municipality of Potes with this circular route of 14 kilometers, a slope of 1,281 meters, and an estimated time of travel of seven hours.

It is a challenging route of high difficulty, especially in winter, so you need quality equipment and high physical preparation. But it is worth taking frequent breaks and admiring the scenery, which is spectacular.

It has several steps and climbs, many stretches of snow and no water available, so it is necessary to take it into account.

This is another classic of the Peaks of Europe, very popular for its low difficulty.  The Covadonga Lakes Route in Asturias can be traveled in an hour or two and a half hours, depending on whether we take the long or short road.

These two lakes, Enol Lake and Ercina Lake, are the original core of the Peaks of Europe.  The circular route of 5 km and two hours of hiking will offer you to take out the camera and capture the landscape.  It is highly recommended to visit the hill of the Mirador de Entrelagos.

The fastest way is through the Buferrera while the other surrounds it.  Both routes are approved as of minimum difficulty, have beautiful views and it’s worth visiting the Mirador del Príncipe, where you can take magnificent photos of your visit with the whole family.

🗻 Route from Poncebos to Bulnes

The Route from Poncebos to Bulnes requires some preparation, as it has an average level and 10 kilometers round trip.

It is not signposted and starts in Poncebos, crossing the Cares River by the medieval bridge of La Jaya.  Then the Tejo canal is left behind and by the Colines bridge you reach a path that ascends to Bulnes de Arriba.

The route has difficult parts and others more comfortable to walk, but it is very rewarding and as it is busy there is no chance of getting lost.  It can be done in a little more than 4 and a half hours, but we recommend that you do it slowly at your leisure, because it is steep throughout its journey.

Another option is to climb on the funicular and then returning by foot, but you will lose the magic of discovering how hard the life of the inhabitants of that region was … and the thrill of walking the route.  If you go with children, you should be careful that you do not trip over any hidden stone in the grass.

This route is close to the municipality of Cangas de Onís.  In total it can be traveled in 6 hours, considering that there are almost 20 km of medium difficulty.

La Vega de Ario is a set of meadows surrounded by high peaks near the Western Massif.  Keep an eye on the weather in the area, because if there is fog the milestones are difficult to see and it is easy to get lost.

Keep in mind that this tour is long.  But if you don’t want to make bivouac, you can spend the night in the shelter of the Ario and return the next day.

This route is appropriate for expert hikers, it lasts two and a half days, and it is really demanding, as we ascend El Tesorero, Horcados Rojos and Torrecerredo through Cordiñanes, Collado Jermoso, Urriellu, Cabrones and Cain to complete 36.24 hard kilometers.

The rural section of the Peaks of Europe does not require much effort.  But the ascent to this path is much more difficult, exceeding 3000 meters of unevenness.  All a hard workout, with dazzling views.

🗻 The mines of Providence in Andara

If what you want is to explore an old mining area, this circular walk in the eastern massif runs along the Providence Mines in the Andara region, along mining roads of some of the routes.  But you will not only see the mines, you will be able to contemplate beautiful sheds and beech forests, in an impressive landscape along its entire route.

In total, the route is 14 km long and can be done in 5 and a half hours, but does not have large slopes and is listed as easy, so it can be traveled by walkers of any age and condition.

Last but not least, one of the most beautiful routes in Spain, a linear stretch of 24 kilometers with only 600 meters of elevation unevenness, but it takes 6 hours to be traveled.

It begins in the municipality of Poncebos, in the “Posada de Valdeón” and offers the hiker a spectacular landscape, for its botanical and geological beauties, which have given it the nickname of “The Divine Throat of Cares”.

It then goes to Caín, and you must return to Poncebos to conclude it, although we can return earlier if we are tired (it’s a linear route).  Hikers have the advantage of walking on foot, because cyclists are prohibited: there are sections without side protection.

Of course, these are some of the routes you can do, but there are many more.  If your favorite is not among our suggestions, we invite you to leave us a comment so that the entire Walkaholic family benefits from your experience.

Who knows?  We may very soon see each other on the road, enjoying together the Peaks of Europe.