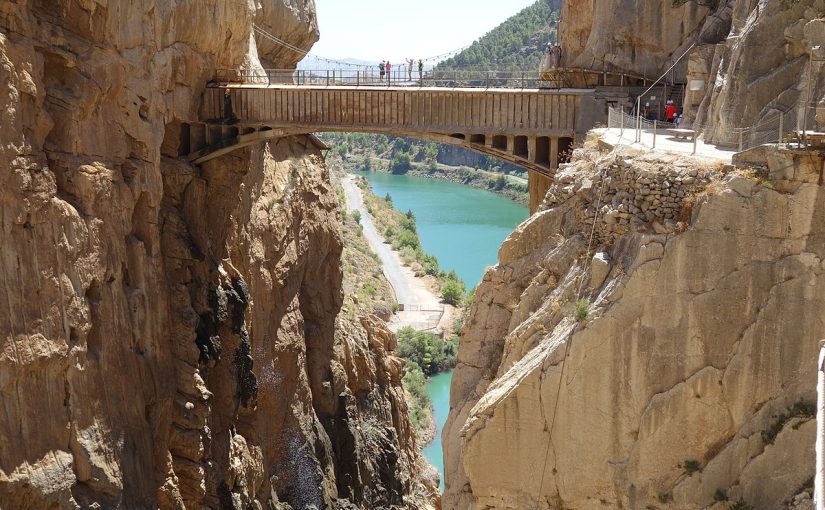 One of the biggest attractions of Andalusia is the climate. This autonomous community enjoys a pleasant temperature during most of the year, which makes it an ideal place for hikers

And allows to go hiking from those how are amateurs or accompanied with children, to the most experienced hikers.

Today at Walkaholic we invite you to discover some of the hiking trails to do in Andalusia. Take note! 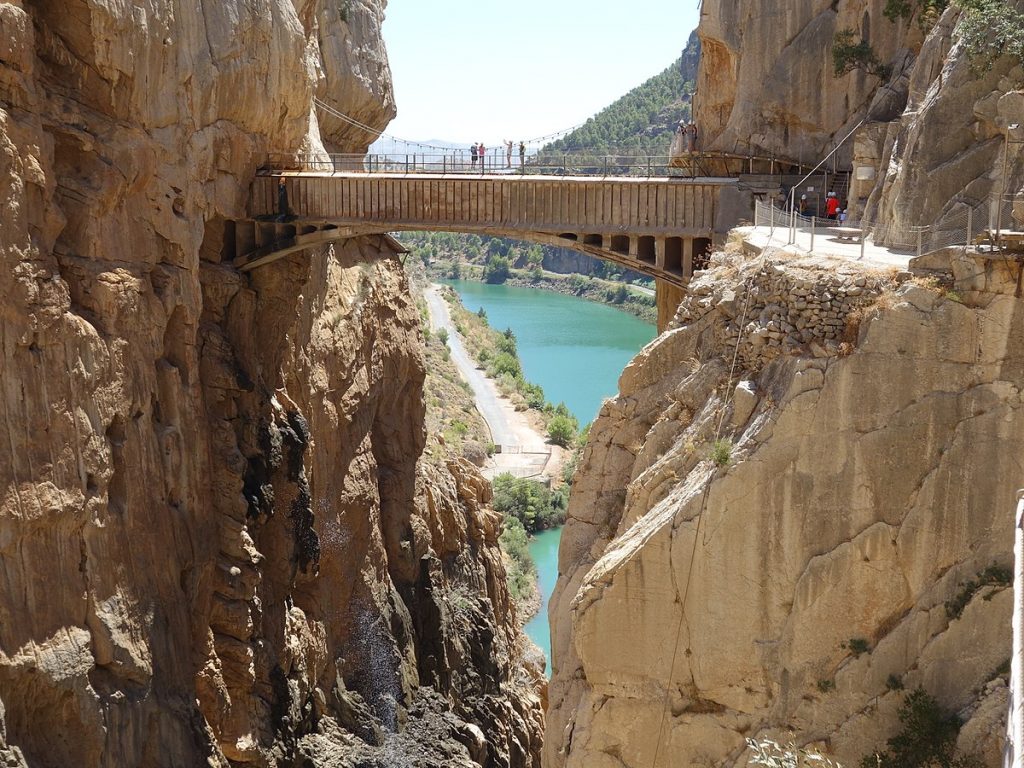 This route was rehabilitated and opened in 2015; being nowadays one of the main tourist attractions of Malaga.

The route has a total of 7.7 kilometers, of which 4.8 are accesses and 2.9 are footbridges.

The footbridges go through an impressive canyon opened by the Guadalhorce River that has vertical walls of almost 400 meters and widths less than 10 meters.

On the catwalks, the distance between the entrance through the control booth and the exit is 2.9 km, divided between 1.5 km of footbridges and 1.4 km of forest tracks.

In this route, stand out mountain birds such as the Egyptian vulture, griffon vulture, golden eagle, honey buzzard, etc., along with several species of amphibians and numerous reptiles (ocellated lizard, ladder snake, bastard snake, an vipers). The mountain goat live at the highest parts, along with foxes, rabbits, dormice, badgers and genets.

The Caminito del Rey route has an estimated duration of 4 hours and it is necessary to book the pass to be able to access, since it has a maximum capacity for 400 people. Depending on the season, this may be little for the number of people who wants to visit it.

Path of the Alpujarra (Granada)

The Alpujarra trail is a “grand route”  that belongs to the GR 142, and runs between Granada and Almería, crossing the southern face of the Sierra Nevada.

It has 13 stages and a total  length of 144 kilometers, which starts in Lanjarón and ends in Fiñana.

The impressive thing about this route are its great contrasts, in it you will get whitewashed houses of cubic shape, crops in terraces, villages lying on the slopes of the mountains, incredible landscapes and a wide range of leisure possibilities. 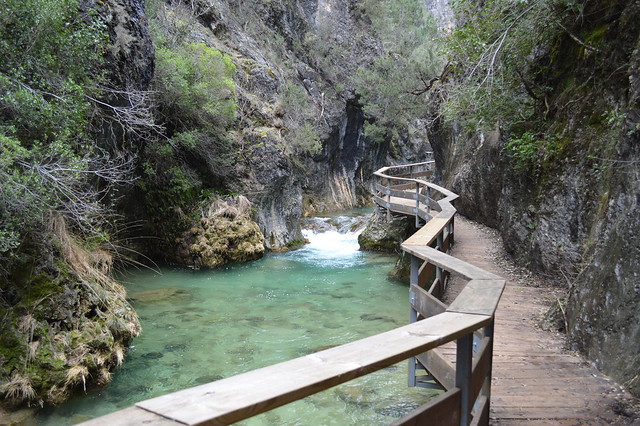 The small river Borosa is located in the Sierras de Cazorla natural park. One of the busiest routes is the one that runs from the fish farm to the FEDA reservoir and Valdeazores lagoon.

The river crosses the vertical limestones of the Banderillas peak through impressive pits, such as Los Órganos and the Elías closed waterfall. It is known for its impressive rock formations and spectacular geology.

This trail has a length of 23 kilometers and is considered mediun difficulty. 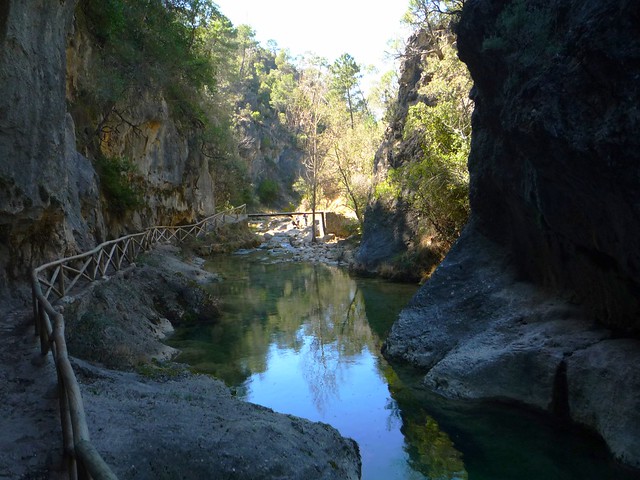 
During the tour you can see a large number of animal and plant species, characteristics of this natural reserve, which include the insectivorous plant Pinguicula vallisneriifolia or Cazorla violet, among others.

The Aracena and Picos the Aroche Natural Park has more than 600 kilometers of roads, being one of the largest trails networks in Andalusia. 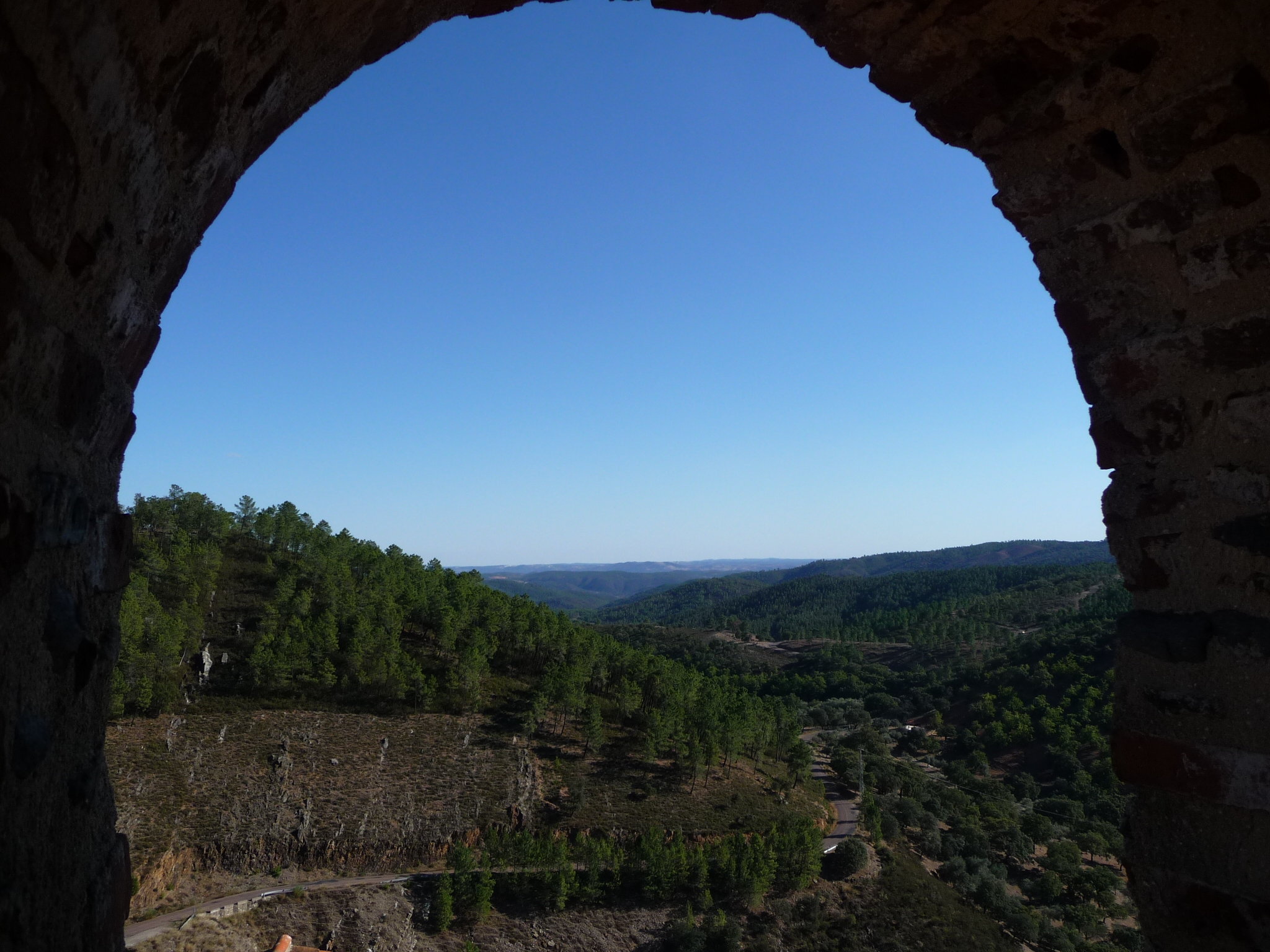 It has an extensive forest, caused by a mild climate with high rainfall.

Among the mammals of the park you can see mongoose, genets or otters. The bird watching is also diverse: it is habitat for vultures, kites and black storks, among other species.

One of the recommended routes is the circular route that includes 18 kilometers that connects the towns of Fuenteheridos Galaroza and El Castaño del Robledo, that can be walked in 5 hours, more or less.

In this tour you will find a landscape formed by chestnut trees; and riverbeds like the Múrtigas through forest galleries where there are abundant trees such as poplars, ash trees, willows and alders, along with brambles and climbing plants.

You can also do the circular route from Alájar to Castaño del Robledo through Casares, that has a route of 17 kilometers with a duration of 4 hours and is of low difficulty. 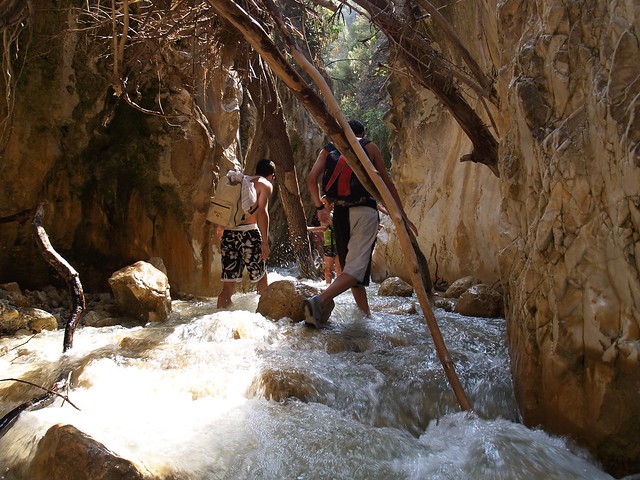 The Chillar River is one of the most beautiful rivers in the province of Malaga for its canyons, gorges and landscapes excavated by the erosion of water on limestone.

To carry out this route, we recommend you go with the appropriate hiking equipment, since this route runs for the most part along the river bed, so you will walk with your feet wet almost all the time.

This trail is a fluvial path and is within the natural park of the Sierras de Tejeda, Almijara and Alhama, it has a medium-low difficulty.

The trail from Rio Chillar to Vado de los Patos is about 18 kilometers of circular route. The approximate time is 6-7 hours round trip, depending on how many stops you make.

Los Cachorros is the most impressive stretch of the route. In this part of the route, the river crosses a beautiful and narrow gorge.

The Veleta Peak is 3,396 meters above sea level and is the fourth highest summit in Spain, belongs to the Sierra Nevada.

There is a route to get to Veleta Peak from the area of ​​Hoya de la Mora, ski resort of Sierra Nevada, with a length of 14 kilometers and a slope of 896 meters that you can do in 7 hours.

If you do this route in winter, you should wear hiking boots and crampons or snowshoes to make the ascent pleasant. 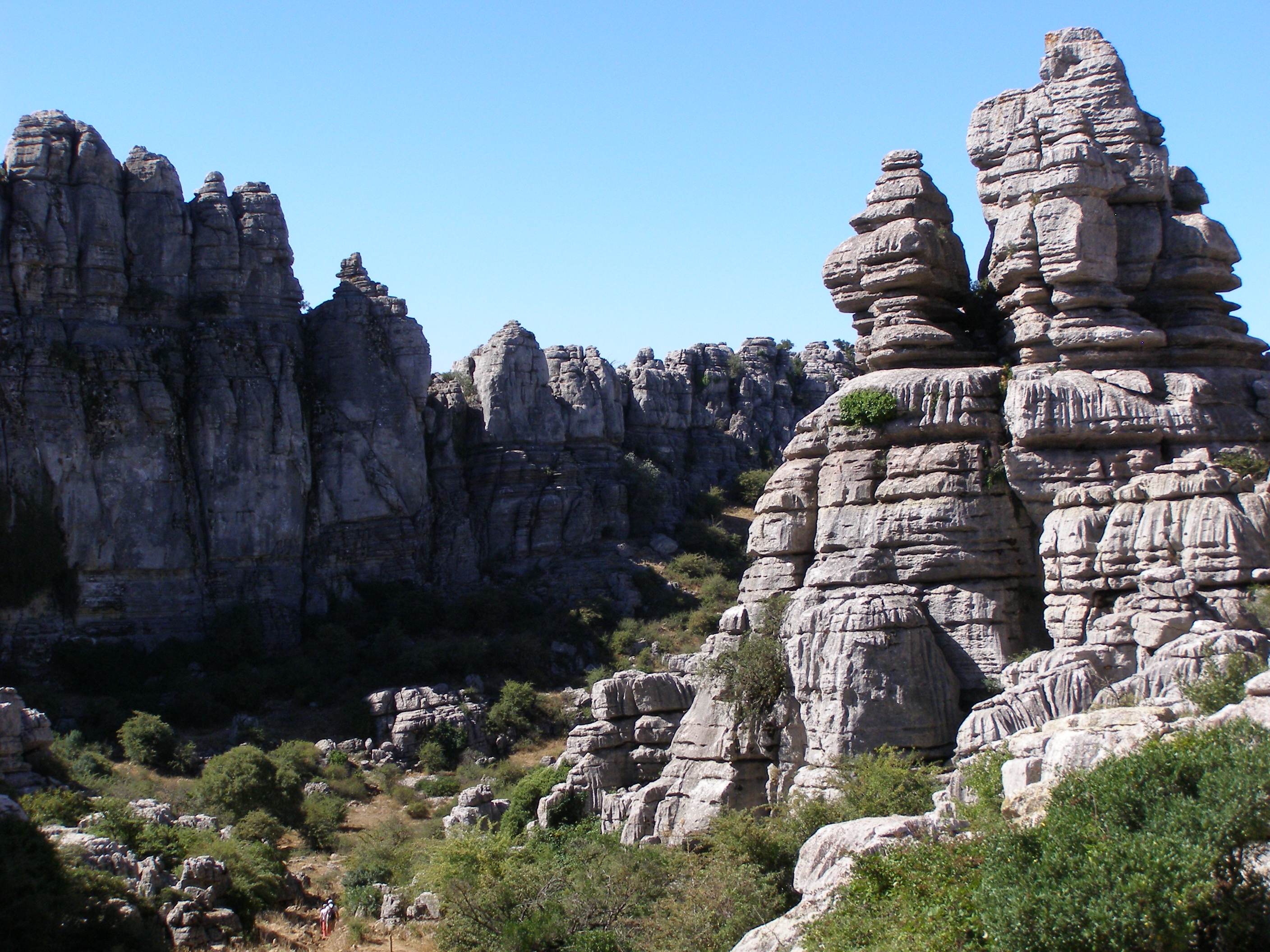 The Torcal de Antequera Natural Park is also an excellent choice for hiking in Andalucía.

This impressive natural landscape is composed of limestone rocks and a unique karst landscape in the world. In addition, has been declared World Heritage Site by Unesco.

Currently, the Torcal has 1,171 hectares of protected space, which include birds such as the golden eagle, the peregrine falcon, the fisher eagle or the griffon vultures, among others. As for mammals you can find species such as the vole, the fox, the badger, etc., but the most striking species is the Spanish goat.

The public marked routes are are:

Green Route. With a circular route of 1.5 kilometers and a slope of 40 meters. It can be done in approximately 45 minutes and its difficulty is medium-low.

Yellow Route. It comprises a length of 3 kilometers with a slope of 53 meters. It can be done in approximately 2 hours and the terrain is stony and irregular.

Orange Route or climb to Torcal Alto. It is a route of 3.6 kilometers. It lasts approximately 4 hours (round trip).

It is important to know that in the heart of the Torcal de Antequera is the Torcal Astronomical Observatory (OAT), which offers astronomical observation activities for individuals and groups.

Now it’s your turn, tell us: what is your favorite hiking route in Almería, Cádiz, Córdoba, Granada, Huelva, Jaén, Málaga or Seville? Leave us a comment, so that other hikers can also enjoy your favorite trail. Who knows? We may see you soon on the road.