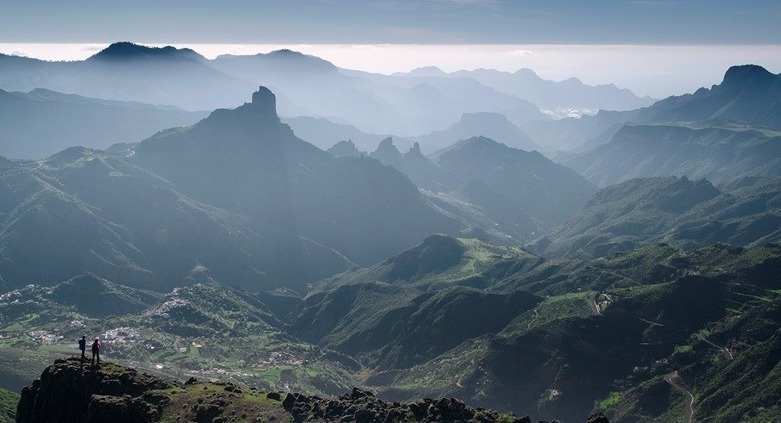 The Canary Islands, thanks to its exceptional climate and the geology of volcanic origin that has shaped this archipelago, represent not only the perfect natural environment for hiking but also a challenge for those who venture into its routes.

These paths have been restored or reconstructed based on the original, used by the inhabitants of the Islands to move on foot. They run through beautiful forests, lonely beaches, valleys of great beauty, challenging elevations and much more, for any degree of experience of the hiker.

Of the 7 islands of the archipelago, the richest in hiking trails we have are: Tenerife, La Gomera, La Palma and Gran Canaria. However, from Walkaholic we show you the 10 routes that, in our opinion, are the most spectacular and recommended.Canary Islands Trekking.

Why not combine 2 pleasures, and after a good day of hiking end with a sea bath? The beach of Antequera can only be reached on foot or by boat, so it is one of the few virgin beaches, the paradise of the Canary Islands. The trail starts at Lomo de las Bodegas, with the same route from PR-TF-5 (from Chamorga to Igueste de San Andrés), but it branches off to the right to take you to the beach. In total, a 4-hour hike from the mountain to the beach so it is perfect for a day.

This route is marked by legends and mystery: from extraterrestrial sightings to a possible Nazi settlement. With moderate difficulty and 3 hours of walking, it begins in the San Juan square in Güímar and climbs a track of about one kilometer, to the cliff. Then you will follow the channel to a waterfall, admiring the seven galleries along the route. There are also old farmhouses and the water pumping machinery, make it more attractive.

It is an easily accessible path that crosses woodland, one of the largest forest masses of the archipelago. Its stream is one of the two channels that have water all year round in the Canary Islands, and a native fauna worthy of admiration. If what you want is peace, this is the ideal place: you can enjoy it to the fullest and stay a few days in the hamlet of El Cedro, next to the Garajonay National Park.

Another of the great Canarias´s forests is in the municipality of Puntallana. Also spectacular are its huge ferns, which will be your companions in any of its trails of low difficulty: it has a circular route of about 11 kilometers with a maximum difference of 750 meters.

The southernmost and smallest of the Canary Islands keeps this great route for hikers, which starts in the cultivated areas of El Pinar a La Cumbre, dotted with Canarian pine and fayal-heather. After reaching the highest point of the island, we went down to the El Golfo Valley in Frontera.

From the Port of Corralejo, the journey begins by boat to this islet that few know. In its less than 5 square km of surface we can climb to its highest point, the Caldera de Lobos, an ancient volcano of just over 100 meters high from which you can see the entire Strait of La Bocaina, separating Fuerteventura from Lanzarote . In addition to touring the islet, with more than 130 plant species and native fauna, this route has the advantage of being able to enjoy its immaculate beaches and beautiful diving areas, and then return by boat to Corralejo.

In addition to beaches, Lanzarote has among its most prized jewels its volcanoes. The largest perimeter is the Caldera Blanca, inside the Natural Park of Los Volcanes. At its peak you can see the Chinijo Archipelago and the Timanfaya National Park, this being one of the most beautiful images of the island. The circular route that surrounds it has almost 10 km and can be traveled in 4 hours, with moderate difficulty. Start in the town of Mancha Blanca, towards the Timanfaya National Park.

8.- The Route of the Dams (Gran Canaria)

If you go to Gran Canaria, the Dams this is one of the obligatory trips. Particularly beautiful is the circular route that starts at the Chira dam in San Bartolomé de Tirajana, passes through the Soria dam in the Barranco de Arguineguín, and the dam of the Cuevas de las Niñas arrives. It is a long route, which comprises a 6 hours walking and travels 15 kilometers, but has landscapes that are well worth it and in the last dam you can enjoy a water sports park.

This is one of the most difficult trails in the archipelago, where for 7 hours you have to leave without a shadow in sight. Fortunately it is downhill, starting at 2000 meters above sea level and ending at the coast. We start at El Pilar Refuge and go through the Cumbre Vieja Natural Park, crossing the slopes of the Birigoyo volcanoes, the crater of Hoyo Negro, Duraznero, Las Deseadas, El Martín, San Antonio and Teneguía to finally reach the Fuencaliente Lighthouse, where we can observe the marine salt pans.

The Tamadaba Natural Park is located between the ravine of El Risco and the Valle de Agaete and is the perfect place to escape the noise and enjoy the Canarian pine and natural tranquility. At 55 kilometers from the capital, it is reached through the town of Artenara by the road of Hoya de Pineda; through Teror and Valleseco or through the dams of Lugarejo and Los Pérez.

Whichever route you choose, hiking in the Canary Islands will always be a pleasant activity and lends itself to discover new natural treasures; from our Walkaholic app we will guide you on any of the routes you choose for this wonderful experience.

Which route would you highlight in this Canarian archipelago? Leave us a comment with the route of your preference, and tell us about your adventures on the trails of the islands.